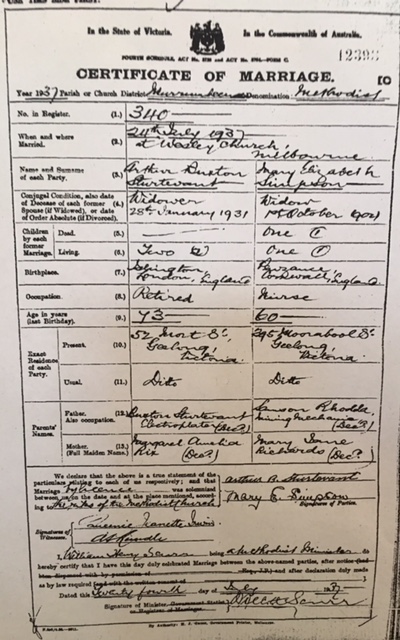 As a child in the 1960's I remember visiting my grandmother Mary in the Royal Freemasons home where she lived in her later years.

Mary was a loving grandmother who I was told had been without a life partner for a very long time. My grandfather had died of influenza in 1904 when Mary was still a young mother in her 20's. After her husband's death Mary worked hard for all her life as a nurse and then as Matron of a rural Victorian hospital.

In later life Mary met Arthur who was 73, they fell in love and married in 1937. Arthur had been divorced and Mary was a widow and it was perfect match. Both their lives were enriched from meeting and marrying later in life.

In her final years, after Arthur's death Mary found it more difficult to care for herself so she moved to the Royal Freemasons Home which was one of Victoria’s first not-for profit aged care providers established in 1867 to care for older people. (originally known as convalescent facility). Mary was happy in her new home and I remember as a child visiting on many occasions and playing in the beautiful gardens around the cottages.

Mary and Arthur are a lovely example of it never being too late for love!